As most of you know, Balans has been boldly standing in Soho since 1987. For 33 years and counting, we’ve been leading the way when it comes to late nights in the central London and have some seriously good stories to tell. In fact we’ve some world exclusive Take That photos that an old Balans employee, the incredibly talented musician Nick Reeves dug out for us. See the gallery below for pure nostalgia and we caught up with him to reminisce about the mid-90s and all of the famous faces who came through Balans looking for a good time. From Take That to Boy George, Nick’s stories bring back to life the wild world of celebrity life pre camera phone days…

Describe Balans back then in 3 words, what would they be?

Who were the most famous people you ever saw come into Balans?

Loads of people came through at all times of the day – Jean Paul Gautier, Take That, Boy George – lots of TV, fashion, film, theatre and music people – you never knew who would be sitting in your section! Loads of theatre stars would come after final curtain, this was a busy time, we were always ready for this wave.

What was your favourite dish/drink on the menu?

For food, the all day breakfast or bangers and mash were always faves! And for drinks, if it wasn’t a very strong coffee (or 5) after/during or before a long shift – then a JD & coke or champagne – it was a time BC.  (Before cocktails!)

What was it like playing live music at Balans back in the day?

I loved performing there – I used to do every Tuesday (sometimes Wednesday). There was music every night from 11pm-1am, except Sunday. We all had our fixed nights and would have fans that specifically came to see us. I am a singer/piano player and this was one of my first gigs in London.

I was so grateful to perform there from 94-96. I would sing ‘Back for Good’, ‘Walking in Memphis’, loads of Elton, Carole King plus endless classics from Queen, Billy Joel, Eurythmics, Cyndi Lauper. I certainly improved my craft at Balans.

We would be positioned at the front on the left hand side as you came in. At approx. 10.45pm the manager would remove one single table and that would be the space for us to perform in. We were visible from the street and often had to deal with passers by gawping at us. I took requests and did my best to get everyone singing along. The staff loved the live music – it was a real gear change to the evening.

What was the vibe in Soho like at that time?

In 1994, Soho was truly evolving and the gay scene was exploding. I had just come out and instantly found a community, a job and life long friends (plus a few romances). Soho was 24-hours, with late night clubs and bars on every street. Balans was the first hub for gay dining, it was the bright shiny new object of everyone’s desire and always rammed pretty much 24/7. If you were lucky enough to know one of the staff, you may find your way to the front of the queue that often stretched down Compton St. As staff we were on the guestlist for every club and party. I hadn’t realised, when I got offered the job, quite how desirable it was to work there.

Plus, there was a real sense of solidarity in Soho in the 90s; everyone knew everyone, we all looked out for each other and we all cherished this new scene that gave us a sense of ‘belonging’ and acceptance. It felt fresh, new, exciting and full of possibilities. There were regular Soho street parties and all the gay bars would get involved – there would be parades, stages, performances, everyone got dressed up. It’s hard to explain how vibrant and exciting it was in the 90s. Gay culture had landed and Soho was leading the way.

Walking around Soho in 2020, is like walking around a different world. Many will remember the clubs and bars that once existed down a little alley or upstairs in what felt like someone’s flat. So many have gone, reduced to rubble and redeveloped into flats or the new Crossrail.

What do you remember about being part of the Balans team?

We were family. There is no other way to describe it. Once you had proved your value as a team member, then you were in the ‘club’.

What was the drink you ended up having to make the most?

Cappuccinos! My goodness in the mid 90s these were brand new, all the rage, people couldn’t get enough. And as I was told on my very first day at Balans (as I stared blankly at the metal behemoth aka the cappuccino machine) *people can spend years perfecting the art of making the perfect cappuccino”!

As time went by. I would often wonder if I lined up all the cappuccinos I’d ever made, how long that line would be…? Then, rather dauntingly, I would wonder ‘how long was the line of future cappuccinos?!’ But then I remembered, it was Soho, I was working in Balans – life was good! 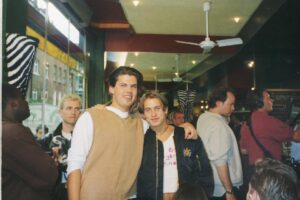 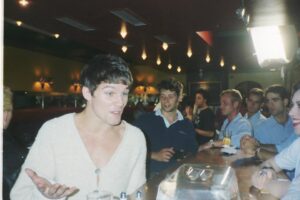 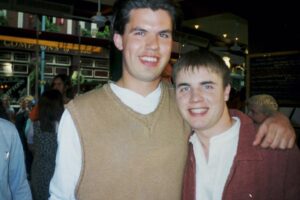 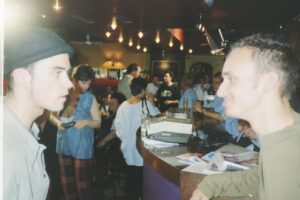 In June, Westminster City Council agreed to proposals made by the Soho Society, to pedestrianise Soho, allowing restaurants and bars to put their tables and

Our in-house Pastry Chef, Remi, is French – as surely all the best ones are. A man who says he couldn’t live without Praline Paste

Getting To Know Our Head Chef, Steve Wilson

We receive a lot of digital reviews and emails these days. But this one, handwritten and left behind on the back of a napkin made

Legendary London DJ and Instagram’s wittiest man @dj_fattony_ is one of our oldest friends and most loyal (and handsome) guests. Tony used to live above

Keeping our customers safe from COVID19

Our customers can be assured Balans is making all efforts to follow best practice and the government’s safety guidelines for COVID19. On arrival we are

George Skeggs, more commonly known – although there’s nothing even remotely common about him – as ‘Soho George’ is one of the last true Soho

Balans Soho Society is very proud to be a dog-friendly group of restaurants. As long as their owners are well behaved and sit quietly, we’re

We will miss you Danny

How long have you worked at Balans? How has Balans changed over the years? It’s become much calmer, much more professional now. In the